The corrosion of steel piping and its related components is a continuous and virtually unstoppable process. The end product, rust, is the result of an electrochemical reaction through which the higher energy processed metal is slowly reverted back to its naturally occurring form – metal ore. Here’s a look at 11 different corrosion types and failure conditions.

Piping failures are often the first sign of a corrosion problem. Yet in many examples, signs of an impending pipe failure have been clearly evident for months or years and ignored. Failures can be minor, in the form of a pinhole leak, or catastrophic, with significant losses due to water damage as well as the cost of pipe replacement. When detected, the problem can be arrested easily with pipe leak repair kits readily in the market.

Pipe repairs take various forms ranging from temporary pipe clamps to pipe leak repair kits and the replacement of the pipe section. Very often, one or multiple individual failures are fixed without further investigation of the hidden cause. While certain sections of pipelines are subjected to heavy corrosion, it is necessary to adopt preventive maintenance measure to perform composite wrapping or repairs on the affected pipe section before a catastrophic failure happens.

Pipe threads are an inherent point of weakness, with approximately 50 percent of the pipe being wall cut away. Leaks occurring from pipe threads are a common sight and it is usually a first sign of a corrosion problem. While it is not an easy task to repair pipe thread leaks, the problem can be resolved with proper pipe repair techniques and using appropriate epoxy repair material and pipe leak repair kits.

Of all forms of corrosion caused to piping systems, weathering damage due to rain, snow, atmospheric conditions, or cooling tower overspray is the easiest to prevent. Most weathering damage occurs over a long time period due to a lack of maintenance and the corrosion will reduce the pipe wall thickness subjecting the pipe to leak easily.

In such cases, it is necessary to identify the structurally weaken and damaged locations via methods such as ultrasonic thickness gauging). Thereafter, preventive maintenance strategy e.g. applying composite wrapping repair to reinforce the pipe wall thickness and removing the effects of weathering directly on the pipe surface will help extend the pipe service lifespan.

Corrosion under insulation is a widespread and typically hidden threat. The issue can arise due to insufficient insulation thickness, inappropriate insulation type or it is improperly installed.

Pipe leaks can occur regularly due to the difficulty to detect leaks before it happens. It is advisable to apply readily available pipe leak repair kits on such impromptu incidents.

Microbiologically influenced corrosion (MIC) is, by far, the most severe and threatening form of corrosion to HVAC piping and fire protection systems. It is caused by the presence of various microbiological agents under specific environmental conditions and can in some cases result in an advanced and widespread failure of entire piping systems within only a few years. An MIC presence usually signals a very severe threat to the entire system, requiring extensive cleanings and repeated sterilization at great expense.

MIC can be eliminated by application of a layer of epoxy coating, metal repair putty, anti-corrosion coating, epoxy repair putty, etc. onto the pipe surface to rid the oxygen supply for these microbes. MIC is commonly found in closed chill water piping, especially those winterizing with glycol, and has been documented to destroy copper, brass, and stainless steel pipe.

Seamed pipe has a greater vulnerability to corrosion at the seam due to many causes. In many examples, poor manufacturing practices produce an internal or external seam which is incomplete. On the inside, this incomplete weld seam then becomes a focal point for rust to establish and promote higher corrosion activity, often leading to pinhole failure.

Most of the external corrosions are due to insulation failure and the fact that it is hidden from view until a leak happens. Left to continue, surface rust develops into stratified layers under which deep pitting accelerates, and against which only sandblasting will prove effective at its removal.

In order to eradicate external corrosion, it is possible to apply epoxy putty or epoxy coatings onto the pipeline. In the event that the structural integrity of the pipeline has been compromised to the severe reduction in pipe wall thickness, pipe wrapping by method of composite wrapping or reinforcement wrapping technique can repair and rebuild the wall thickness.

Most heavy rust deposits are produced after decades of high corrosion activity, only falling loose to be carried to the cooling tower after some form of shock to the system, such as a spring start-up or temperature change. They are rarely captured by most filtration systems or removed or dissolved by most chemical adjuncts.

Copper pipes are not immune to the effects of corrosion. In fact there are many copper pipe corrosions, leaks and failures occurring.

Failures at copper piping systems are mostly related to specific conditions or events, such as acidic and low pH water, galvanic activity and improper grounding or stray voltage, or high steel corrosion activity resulting in the migration of iron oxide into the copper lines. 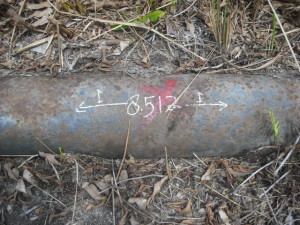 Here are a few stages to help you manage pipes blast and pipes spills. This article manages impermanent repair as opposed to supplanting the pipe. The water supply is under pressure, usually around 40 to 60 psi. A patch on a leak obliges counter-pressure and a compressible material to help in embellishment it to the […]

Introduction Anti-corrosion coatings do not last forever. They age, weaken and deteriorate and eventually their useful life ends. The most common cause for premature anti-corrosion coating failure is insufficient care during the mixing, application and curing processes. Poor application technique can typically cause problems such as improper thickness, pinholes, sags, mud-cracking, and holidays. Inadequate surface […]